Happy Dankfescht!
For Urglaawer (and for many others in the Deitscherei) this is the second observance of giving thanks. The first falls around the autumn equinox in the form of the Harvest Home or Erntfescht. At that time, folks offered up portions of their harvest to the deities (or deity of choice) and helped to ensure that their neighbors are cared for. In more modern terms, we now conduct food drives and donate canned goods to the shelters, etc.
Erntfescht is a traditional observance within Deitsch culture. The American Thanksgiving is significantly later than the end of the major harvests. By this time of the year, our ancestors were trying to store as much as they could and were culling herds to conserve resources. Granted, the origins of Thanksgiving are in one specific story of the Pilgrims and the Patuxet Wampanoag, which has now become codified as a federal holiday. Thus, the holiday falls where it falls.
Since it never hurts to give thanks to the gods, goddesses, land wights, and each other for all the blessings that we have in our lives, we'll grab a turkey drumstick, tip our hats to Tisquantum and his compatriots, and enjoy ourselves today. We wish all of our friends and colleagues the same joy of life!
Heel zu de Ziewe!
Posted by Der Graabhof at 9:08 AM No comments:

I have seen a lot of discussion about Halloween on various lists, and I wanted to share the importance of October 31, which we call Allelieweziel, within the old Deitsch (Pennsylvania German) culture and in Urglaawe.
A significant volume of oral lore was passed on via practitioners of Braucherei (the Elder Deitsch healing and magical practice), particularly from those who maintained a Heathen worldview when it came to their healing of the souls of the departed.
Years ago, several of my colleagues conducted oral interviews of over 80 practitioners of Braucherei, and the notes that they took from the interviewees who carried Heathen or syncretic views provided a very interesting picture of the importance of October 31.
The first interesting element is the name of the event: Allelieweziel. Christian practitioners of Braucherei did not use this term. While we can translate the term's meaning, "the goal of all love," we have not found a corresponding term in other German dialects (if anyone knows more about this, please contact me).
The observance of Allelieweziel represents the transition from the light half of the spiritual year to the dark half. Holle's departure on the Furious Host (Wild Hunt) is reflected in the death of the fertility of the soil. Allelieweziel is the death phase of the life-death-rebirth cycle. 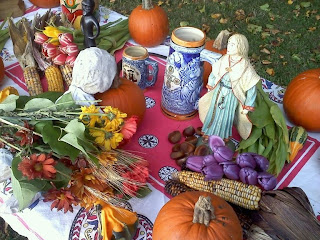 As Holle sets off upon the Furious Host, She is followed by an entourage of the lands spirits and the souls of the recently departed. Throughout the dark half of the year, Holle hunts for stray souls. As She finds them, they join the Furious Host until She brings them to her figurative mill to "grind" them into their next life. Practitioners of Braucherei also use traditional journeying practice to help seek out stuck souls to help them cross over to the mill.
As a principally agricultural people for centuries before migrating to North America, the ancestors of the Deitsch transmitted no information about going to the hall of any deity upon death [Note: later interviews have turned up some hints of going to halls or realms]; instead, human souls follow cycles similar to that of the crops that dictated their livelihood. As such, most Urglaawer belief in a rebirth of the soul within the family stream (a concept that is also seen in the lore of the rune Othala) as opposed to Valhalla, etc.

Another aspect to the holiday is the recognition of sacrifices that males make for the good of the community. Traditionally, as winter set in, culling of herds, particularly males, helped to provide food for humans and conserve resources for the remaining herd. This recognition is underscored by the burning of the Butzemann, or activated scarecrow, by the end of Allelieweziel.

The Butzemann is created from the remnants of the prior year's crops and is ceremonially granted life on Grundsaudaag (Groundhog Day). He is charged with overseeing his "child" crops for the season. Similar traditions are featured in other cultures. Throughout the light half of the year, the Butzemann is treated like other wights. Offerings and gifts are given to him. Anytime between Erntfescht (the autumn equinox/harvest home) and Allelieweziel, the Butzemann is released from his duties and he is to be burned in order to free his soul to join the Furious Host. The "soul" of the Butzemann is not human; it is one of the crops from which he is constructed, but all living things in Braucherei tradition have souls that are part of the cycle.

It is considered very bad luck to keep an activated Butzemann after Allelieweziel. If the soul of the Butzemann were to depart on the Furious Host, his remaining shell is likely to be taken up by a baneful land spirit, who, now having physical form, would terrorize the countryside. I remember my parents telling me that if I did not get back into bed on Christmas Eve that the Butzemann would "get me." Similar stories turn up all over Deitscherei.

It is also considered bad luck to wear clothing that was on a Butzemann. People often give warnings about this a look askance; however, in the Colonial era, it appears that vagrants often walked the great distances from town to town seeking work. As their clothes began to wear down, apparently they would occasionally exchange their clothes for those on a Butzemann. For some reason that we have not yet been able to fully identify, this theft is considered to be of a higher Wurt payback than theft of food from farms, etc.

Prior to the Butzemann's burning, we are to show him some of the remaining crops from which the next Butzemann will be created. This is to thank him for his success and to ensure him that the lineage will go on. Then, as he is burned, he is to be taking with him all of the things that we wanted to banish from our spiritual lives, particularly things that were on our list of resolutions at the New Year. The pyre is to bring about the extinction of those negative aspects of our lives along with any gifts to the deities. As we watch him burn, we honor his work and reflect upon the year gone by.

Appropriate runes at this time are Jera, representing the cycle of life as well as the cycle of the year, and Hagalaz, for the extinction of things that impact our lives negatively. As the Hagalaz rune on the Younger Futhark is most likely the root of the six-point rosette on the traditional Deitsch hex signs, we often use that form of the rune.