A new issue of Hollerbeer Hof for Autumn 2020 is available here. Enjoy! 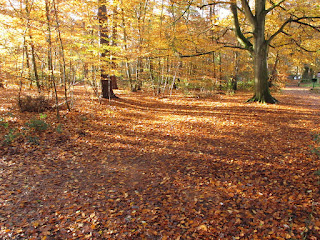 Do you have a piece of art, poetry, devotional, or research article related to Urglaawe you'd like to be considered for publication in Hollerbeer Hof?

Submissions for each issue are: February 28 (Spring), May 30 (Summer), August 30 (Autumn), and November 30 (Winter). Please submit to sara@urglaawe.org.

Artists retain all rights to their work. By submitting, the artist agrees to allow Hollerbeer Hof to publish their work within one year of the submission due date; after that year, Hollerbeer Hof must reacquire permission to publish.

Posted by Sophia Grabb at 10:37 AM No comments:

I'd like to thank the Urglaawe community for the vibrancy and excitement that I am seeing as we draw nearer to the Zisasege observance (September 28, 2020, beginning at sunset on Sunday, September 27).

Erntfescht was a turning point for many of us. It was the first time we had gotten together as a group beyond the Ziewer (godsfolk) and their family members. Since then, I have slowly begun to feel reinvigorated, and it appears that others are sharing the same feeling.

Obviously, we still need to be careful with the covid issue, but much of what is weighing many people down stems from a lack of hope or of something to look forward to.

Zisa seems to have uncorked (another of Her ways of interacting with us?) a bottle of joy and is pouring it out widely. For me, this joy is coming in the form of continuity. For the first time in almost a year, I am seeing the ability to pick up the efforts from last year and to bring them through the crises and *not only to  carry them again but to expand upon them.*

This is hope at work.

I remember this feeling, and it's long seemed elusive.. Yet here it is again, hopefully to stick around.

Many of the Zisasege ideas being floated about the Urglaawe community relate to this continuity... beginning new creative offerings and adding to them each year...

... and now I just had a Clue x 4 moment with a flashback to Sacred Space 2017. Jennifer Milby and I were working on a PowerPoint presentation on Zisa, and the topic of continuity and regeneration came up. Some of Zisa's lore lived on through the centuries in the guise of Maria Knotenlöserin, or Mary Undoer-of-Knots. 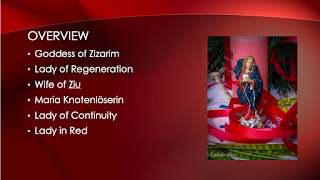 Although the Church and its successors attempted to suppress the belief in the old deities, the Church's own lore sometimes inadvertently provided continuity by preserving  some awareness of our gods and goddesses.

Beginning in about 2008, Zisa's presence began to be felt among some folks in the community. By 2012, Her name was more widely recognized and came up in discussions at Trothmoot. But 2015 is when things really began to change. The course switched from continuity to regeneration.

Some folks around here will remember that Pope Francis came to Philadelphia at the time of Philadelphia Pagan Pride Day in 2015 (September 5, 2015). Pope Francis is from Argentina, where Maria Knotenlöserin has a large following, and Pope Francis reveres her. Thus, we extended an invitation to Pope Francis to join our Zisasege that year, never expecting to hear back from anyone (we did, but that is a separate topic). This offer, though, seemed to trigger something in the relationship between Zisa and the Heathen community. Her name was spoken widely in Heathen circles, and more insights into Her areas of concern were developing into a community gnosis.

By 2017, there were quite a few dedicants to Zisa whom I knew of, and I would expect that there are many with whom I am not acquainted. Discussion had led to commentary that Zisa would play an increasing role, not only in bridging the ancient past to the present but also in regenerating the connection between humanity and divinity. Zisa had emerged from the darkness of suppression.

Fast forward to 2020 and jump back up to the first five paragraphs of this post.

Posted by Robert L. Schreiwer at 9:57 PM No comments: 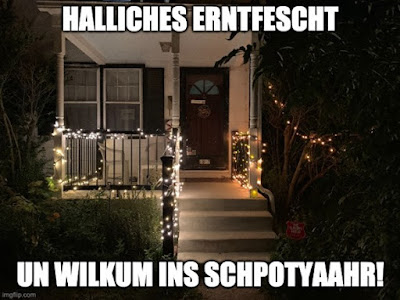 Posted by Robert L. Schreiwer at 9:30 AM No comments:

July 6 marks the anniversary of a major event in Deitsch history, and, as such I'd like to hail the Netherlands Dutch and their forebears and ancestors.


On this date in 1683, the first ship, the Concord departed from Rotterdam in the Netherlands. On this ship the first "official" settlers who would begin the story of the Pennsylvania Dutch nation.

Thus, on this date (it is July 6 in Rotterdam now), the Great Migration of the Germans to Pennsylvania began.

We Pennsylvania Dutch are ultimately mostly Germans speaking a German dialect and bringing together customs from many German lands. We have evolved as a unique "tribe" or "nation." The moniker of "Pennsylvania Dutch" confuses many people, and much of that confusion is due to a change of the meaning of the word "Dutch" in English, which once had a wider meaning than it does today.


Additionally, we call ourselves "Deitsch," which sounds a bit like "Dutch," and, as was the case with the Concord, many of our early forebears arrived on ships that departed Europe from ports in the Netherlands. The Concord's departure was an indelible moment in the settlers lives that lives on in the presence of the ship on the Deitsch flag today.

Our migration included many people from the Netherlands as well. Although the first arrivals on the Concord were German speakers from Krefeld, some of their surnames were decidedly Dutch.
In many ways, your ancestors were heroes. They got my ancestors out of the wreckage that was the Palatinate after all of the ravaging wars. So, on behalf of my ancestors who I know traveled through Rotterdam, I thank the forebears and the Dutch of the current era.
The Dutch and the Pennsylvania Dutch, though we have separate identities, share strong historical and cultural bonds that are only increasing as the gods and goddesses bring us closer together.
Hail to Holle!
Hail to Nehalennia!
Hail to the Netherlands and to the Dutch people!
May your light always shine brightly!

Posted by Robert L. Schreiwer at 10:57 PM No comments:

Ministry of Ideas Podcast on Heathenry

Ministry of Ideas is a podcast dedicated to investigating and illuminating the ideas that shape our society. It is an initiative of the Religious Literacy Project at Harvard Divinity School.

In Episode 23 (July 1, 2020), the podcast focuses on Heathenry, specifically the divide between inclusive Heathenry and folkish/exclusionary Heathenry.

Much of this podcast stems from the research work of NYU journalism and religious studies student (now graduate), Robyn Lanz.

Robyn contacted Rob Schreiwer back in 2016 about using HAH (primarily), The Troth, In-Reach, and Urglaawe as case studies for her Master’s thesis: Mediating Heathen Identities: How Adherents of a Small Neo-Pagan Religion in America Engage with Formal Media Structures in Attempt to Legitimize and Discredit Specific Identities in America’s Public Discourse.

There is indeed an imbalance of reporting on Heathen-related topics in a manner similar to how anything related to Islam is generally handled in the media.

Robyn began to collect inform and data by coming down from NYC to the Philly area for our Pubmoots, for Distelfink’s rituals, and for interviews. She attended Frith Forge as a journalist. She observed HAH activities as a journalist in various contexts, including the Walk Against Hate in Philadelphia in 2019.

She also attended the Parliament of the World’s Religions in 2018 for the HAH presentation.

Due to covid, the NYU students’ first drafts of their theses were approved, which means Robyn is still editing it for future publication. The first draft made some excellent points, particularly about how she had been advised to use the folkish/Nazitru types as the subjects because (Rob's own words here) those idiots cause more of a sensation with their stupidity and audacity than we do with our work to build welcoming communities.

We really hope she gets it published!

In the meantime, enjoy the podcast. Here's the link again!
Posted by Robert L. Schreiwer at 9:07 AM No comments: 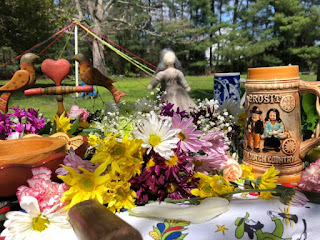 Posted by Sophia Grabb at 3:27 PM No comments: 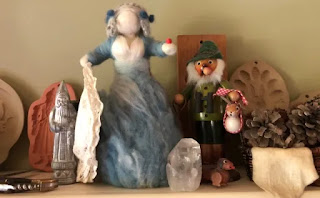 Holle's Haven: The Urglaawich Podcast is now available on Apple Podcasts and Spotify! You can always find the pocast at it's home: https://holleshaven.com/

Posted by Sophia Grabb at 1:06 PM No comments: