The Urglaawe observance of Allelieweziel got a write-up on the Wild Hunt, which is a major Pagan news source.

It is a good article by Heather Greene with some good photos by Jennifer Milby of Distelfink's ceremony from Sunday, October 25, 2015

Posted by Robert L. Schreiwer at 6:46 PM No comments:

The videos below are of the panel's presentation at the Parliament of the World's Religions on Pagan/Heathen traditions that have their indigenous roots in Europe.

Unfortunately, I was trying to record and to talk at the same time, so the video quality is a bit clumsy, plus the video stopped at least twice, and I lost one of the longer responses to a question. There is an audio recording that was taken, and, if that becomes available, I will post it.

Urglaawe Altar at the Parliament of the World's Religions

This altar to Holle was set up in the Pagan Faith Space during the 2015 Parliament in Salt Lake City, Utah. Distelfink is honored to have had the opportunity to be present at the event, and we are grateful to Leslie Hugo for providing us with the space. The altar generated interest that led to The Troth's booth, where more materials were available.

Posted by Robert L. Schreiwer at 10:24 PM No comments:

Bristol, PA: This year, Distelfink Sippschaft will hold its Allelieweziel (“goal of all love”) observance on Sunday, October 25, 2015, at the organization’s Hof grounds in Fleetwood, Pennsylvania, at 1:00 PM. The observance will take place one week prior to the beginning of the actual Allelieweziel holiday dates, which begin at sundown on October 30 and run through sundown on November 11. The early observance is intended to allow members to be present at their homes on Halloween.

Allelieweziel represents the transition from the light half (Brechthelft) of the spiritual year to the dark half (Dunkelheft). The holy days begin with the goddess Holle's departure from the soil onto the Wild Hunt (or Furious Host). Allelieweziel is the death phase of the life-death-rebirth cycle, which is affirmed by the honoring of the god Holler, who is closely associated with death, on November 11 on the holiday of Ewicher Yeeger.

As Holle sets off upon the Wild Hunt, She is followed by an entourage of the lands spirits and the souls of the recently departed. Throughout the dark half of the year, Holle hunts for stray souls. As She finds them, they join the Furious Host until She brings them to her figurative mill to "grind" them into their next life.

Another aspect to the holiday is the recognition of the contributions and sacrifices that males make for the good of the community. Traditionally, as winter set in, culling of herds, particularly males, helped to provide food for humans and conserve resources for the remaining herd. This recognition is underscored by the burning of the Butzemann, or activated scarecrow, by the end of the first day of Allelieweziel. The Butzemann is the “father” of this year’s crops and is now released from his duties. Prior to the burning, though, he is to be shown seeds or cuttings of plants to help ensue that we will nurture his descendants.  Then, as he is burned, he is to be taking with him all of the things that we wanted to banish from our spiritual lives, particularly things that were on our list of resolutions at the New Year. The pyre is to bring about the extinction of those negative aspects of our lives along with any gifts to the deities. As we watch him burn, we honor his work and reflect upon the year gone by.

The Wild Hunt (@thewildhunt) tweeted out a photo of our altar at the Parliament of the World's Religions. :) 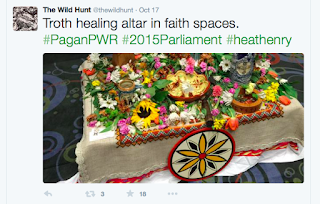 Posted by Robert L. Schreiwer at 6:01 PM No comments:

Parliament of the World's Religions Underway!

The Parliament of the World's Religions has already exceeded my expectations. I have enjoyed seeing the diversity of the religious practices, and I have equally enjoyed seeing others express interest in Urglaawe and Heathen practices.
The Urglaawe altar is set up in room 150 F (also accessible through 150 G), and booth with Troth representation is #878 in the exhibit section. 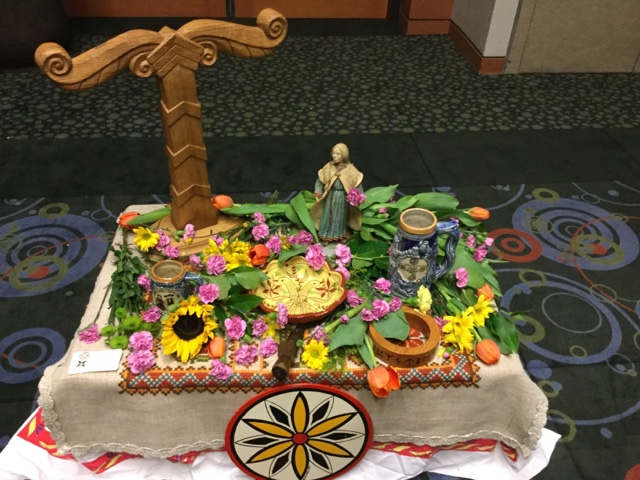 I will be representing Urglaawe on the panel presentation titled Rebuilding the Altars: Reconstructing Indigenous Pagan Faiths for Today." On this panel will also be Diana Paxson, Kirk Thomas, Erynn Rowan Laurie, Dr. Gwendolyn Reece, and Eli Sheva, each representing a different tradition.
Posted by Robert L. Schreiwer at 11:34 PM No comments:

Distelfink's Press Release for the Parliament of the World's Religions

BRISTOL, PA: In an historic moment for Heathens across the globe, the Parliament of the World’s Religions in Salt Lake City, UT, will include two presentations by Heathen leaders. The Parliament runs from October 15 through October 19, 2015.

Robert L. Schreiwer is the President of Distelfink Sippschaft, which is an Urglaawe religious organization based in Bucks County, PA. Schreiwer is also Assistant Steer (Vice-President) of The Troth, which is a large international Heathen organization. Schreiwer will represent the Urglaawe tradition of Heathenry in the panel discussion, “Rebuilding the Altars: Reconstructing Indigenous Pagan Faiths for Today.” Mr. Schreiwer says, “This is a significant opportunity for Heathen leaders to engage and to network with leaders of other religions. This event will increase the visibility of Heathenry in the public eye and set a precedent for inclusion in future endeavors.”

Diana L. Paxson, Elder in the Troth and in the Covenant of the Goddess, and gythja (leader) of Hrafnar Kindred in California, will lead this momentous discussion.  Fellow panelists Erynn Laurie, Elisheva Nesher, Kirk Thomas, and Dr. Gwendolyn Reece will join Paxson and Schreiwer in discussing the distinction between their traditions and Wicca, and the challenge of resurrecting interrupted pagan traditions from the past. Schreiwer’s portion of the discussion will include the influence of the Pennsylvania German  traditional practices of Braucherei (Pow Wow) and Hexerei on Urglaawe. The panel discussion will take place on Sunday, October 18.

Paxson will also speak on “Staving off Ragnarök: A Heathen Response to Climate Change.” This presentation will focus on the Heathen tradition, offering mythology and values that conceptualize this struggle, work with the powers of nature that sustain us, and fight the forces that would destroy our world.

The Parliament is the oldest, the largest, and the most inclusive gathering of people of all faiths and traditions. This year’s Parliament will bring together 10,000 Global and religious leaders, grassroots activists, and practitioners from 50 traditions and more than 80 countries.  Its theme, “Reclaiming the Heart of our Humanity,” includes discussions and presentations on topics critical to our times: climate change and creation care; war, violence and hate speech; and economic inequality and wasteful living.  Parliament attendees can visit the Heathen information booth or Urglaawe altar in the Pagan Faiths space for more insight into these traditions.

For more information on the Urglaawe tradition, please visit http://www.urglaawe.net. To support the Heathen contingent in their work at the Parliament, please visit
https://www.gofundme.com/heathen-parliament.
Posted by Robert L. Schreiwer at 8:18 AM No comments: