Based on community discussions via the Urglaawe group page on Facebook, Kate Cullifer designed the new Urglaawe logo! 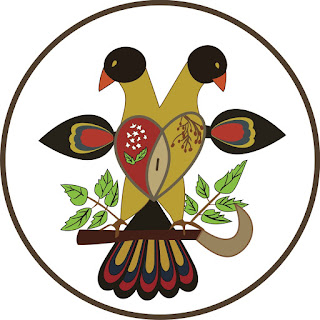 The logo was rendered to graphics files by Rembranded Illustration Studio.

Congratulations on a job well done!!
Posted by Em Urglaawe sei Dinschtgebrauch at 9:36 PM No comments:

PROVISIONAL 2016 OBSERVANCE CALENDAR
(Note: This is for observance dates, not necessarily the same as gathering dates)

This is still rough-hewn, but here's the starting blocks for the 2016 calendar.

Sundown of Feb. 1 until Sundown February 12: ENTSCHTANNING (including Groundhog Day, which starts sundown Feb. 1 and runs until sundown Feb. 2)

In-Reach Heathen Prison Services was featured today on the Bits of Heathenry Podcast. Along with the other topics that we addressed, we  discussed some of the varying viewpoints within Heathenry on the worthiness of Heathen prison work.
Posted by Robert L. Schreiwer at 3:35 PM No comments: