For folks who identify with Urglaawe, there is a meal requirement on Twelfth Night (December 31, the Feast Night of Berchta), of herring, gruel, and Zammede (pancake or dumpling). More Heathens in different traditions are also beginning to adhere to that requirement. See Grimm's "Teutonic Mythology," volume 1, p. 273 (among other references in the work):

Berchta, like Holda, has the oversight of spinners; whatever spinning she finds unfinished the last day of the year, she spoils. Her festival has to be kept with a certain traditional food, gruel and fish. Thor says he has had sildr ok hafra (herring and oats) for supper...; our white lady has prescribed the country folk a dish of fish and oat-grits for evermore, and is angry whenever it is omitted (Deutsche sage, no. 267). The Thuringians in the Saalfeld country wind up the last day of the year with dumplings and herrings.

This meal on Twelfth Night stands in stark contrast to the meal of Twelfth Day (New Year's Day), which is the ornate pork and sauerkraut of old Pennsylvania German traditions. Juxtaposing the end of Yule's darkest times with the beginning of the New Year reminds us of our hopes and dreams for the future. 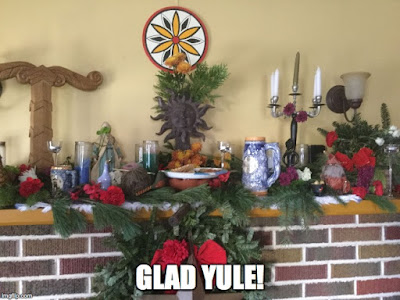 Posted by Robert L. Schreiwer at 11:36 PM No comments:

Most of our photos came from the preparation period because it was difficult to take photos while marching, but there were other people taking photographs of the parade along the marching route. Hopefully we will be able to share more in the future. Featured in our photos are Mike Hicks in his debut in the role of Belsnickel. Robert L. Schreiwer reprised his 2013 role as Gedreier Eckhart, the leader of the Wild Hunt from Deitsch lore. Andria Carpentier marched as a spirit in the Hunt and assisted others with makeup. Corrine Johnson delighted the crowd with her stunning handmade Yule Cat (from Icelandic lore) costume. Joe Barrett and other folks formed a group of Yule Lads.

Channel 17 has some great pics posted, particularly from the fire performers!

Photos from Channel 17 in Philadelphia

Once again, Krampuslauf Philadelphia: Parade of Spirits has exceeded our expectations. This wondrous, grassroots, community- and participant-driven event continues to grow and to flourish in the City of Brotherly Love.
Posted by Robert L. Schreiwer at 8:27 PM No comments:

We Need Your Socks!


Socks are one of the most requested items at homeless shelters, but they are also one of the least-donated items.

We will be collecting socks for folks in need. We need all sizes, from baby to adult male. Practical socks, fun socks, fuzzy socks, holiday socks, argyle socks are all needed!

Stock up stacks of socks and stockings and help to bring warmth to the feet of those in need this Yuletide! 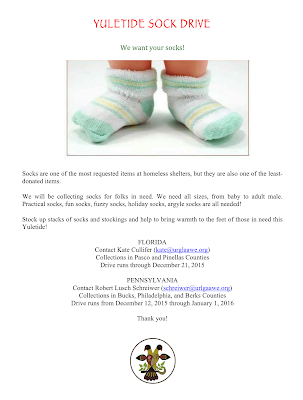