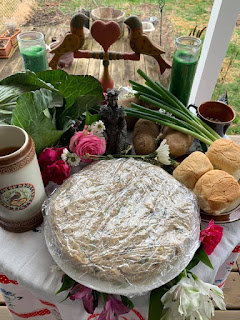 Who is the Frouwa?
The Frouwa (“the Lady”) is widely known among the Germanic peoples. The Netherlands Dutch know Her as Vrouwa; in English, She is called Freya, and in Norse, She is called Freyja. Each culture perceives Her differently, but there are some common elements throughout Her lore. What is cited below is the lore from the Pennsylvania Dutch/Urglaawe perspective, which, due to the ins and outs of the forced conversion to Christianity brings some unique perspectives to the understanding of one of the most vibrant and readily accessible deities in the Germanic pantheon.

die Frouwa vun de Wane:
She is a goddess of the Wane/Vanir tribe, though her understood lineage from Norse lore does not fully match ours, it is quite possible that the Norse lore clarifies a few points that just might make Her lineage clearer.

It is fairly widely accepted in Norse lore that the parents of Freya and Her twin brother Frey (known to us as Fro or Froh) are Njörðr (commonly called Njord) and His unnamed sister, who many believe to be the earlier-attested Nerthus. Now, here come some dot-connecting and unproven theories, but there are some similarities of folklore that should be researched more.

Although most Urglaawer and other German Heathens perceive Nerthus and the goddesses Holle and Erda as different deities, there are similarities that can lead to some theories. Linguistically, the connections are closer between Nerthus and Erda.

Nerthus and Erda (and some also say Holle) are each said to be offended by the presences of iron forged in any form, but especially iron forged as tools that cut the ground. I can readily understand the possibility that Nerthus and Erda are the same goddess known from different perspectives.

The Norse identify Jörð in their lore as the mother of Dunner. Jörð is neither of the Ase or the Wane, but Dunner is counted among the Ase due to Odin being His father.

Deitsch lore reflects this. Wudan is Dunner's father, and his mother is Erda. However, Erda is said to be of the Wane in our lore, which would make Dunner half-Wane and half-Ase. There is a lack of clarity here.
There is a potential connection, albeit slight, between Njord and our Holler (Ewicher Yeeger) in the form of connections to fishing, the wealth of rivers and streams  However, the connections between Holler and Ullr are stronger. It is also possible that Njord, Holler, and Ullr are discrete, unique deities whose lore should not be taken automatically as being more than matters of circumstances.
One can see why more research is needed.

But let's look at what we currently have anyway (and hope for more information to emerge hence):
Njord + Nerthus = parents of Freya and Frey  (generally accepted)

If Njord and Holler are the same deity:

Holler + Holle = fully Wane Frouwa and Fro.  Holler and Holle are widely believed to be consorts, whether sibling or marriage.

The latter makes more sense to me, yet it still leaves a lot of open questions. And the research goes on.

Other Attributes of Frouwa:
She is the Matron of all cats. She is associated with love, lust, beauty, sex, fecundity, sowing and reaping the bounty of the land. She is also shrewd, wise, and, so oral tradition has indicated, has a business acumen like no other.

Many of Her attributes (except for the carnal ones and business acumen) were grafted by the Catholic Church onto St. Gertrude of Nivelles, who was sainted for her work in the German lands. Gertrude was born in Landen, which would indicate Flemish ancestry, circa the year 628. She died on March 17, 659, hence the timing of her feast day.  The Church was busily engaging in forced conversion and was eliminating adversaries during this time (for contrast, St. Funnyface... err... Boniface was born in 675), so this is happening right in the middle of the Catholic terrorism of the adherents of the Heathen religions.

In order for stability to take hold in conquered areas, the Church often resorted to taking the attributes of locally known deities and adding them to the lore of saints. For a good (I'd almost say "authoritative" description of the the Catholic Church had to do to get the conversion to succeed, see The Germanization of Early Medieval Christianity: A Sociohistorical Approach to Religious Transformation by James C. Russell; beware that it is not an easy read).

So attributes of the Frouwa were spun into an acceptable Christian context that became attached to St. Gertrude, and the lore of St. Gertrude was applied to the date of her death, March 17. It is interesting that St. Gertrude’s Day observances were retained by the overwhelmingly Protestant and Anabaptist Pennsylvania Dutch — not so much as a religious icon but as a cultural market and tradition.

Urglaawer generally accept that the retention of this lore is relevant to our worship of the Frouwa, again calling to the Lady of the Wane. Although it is virtually certain that the Church did not intend to keep parts of the story of the Frouwa alive, we Urglaawe still tip the hat to St. Gertrude for serving as the vehicle that has provided us with a method to rebuild the severed relationship with the Frouwa. As such, we keep the feast day of March 17 (but set it to the lunar calendar as 17. Lenzing, and the feast day begins on the solar calendar date of March 16 at sunset and ends on March 17 at sunset.

Because St. Gertrude of Nivelles was created by appropriating many traits of the Frouwa, one could argue that a syncretic honoring of the Frouwa has (wittingly or unwittingly) been going on since the 7th century. We Urglaawer will watch as our use of the ritual, absent its Christian overlay, evolves to meet Frouwa's needs.

Oh, did I mention that the lore of St. Gertrude's Day features other entities and practices that come straight out of Heathen cosmology and are certainly not Church approved? One such creature is der Waldmops, whose name literally means "forest goblin," who is considered to be the Lord of the Beasts and is said to be he who colors the southeast wind green to ensure bounty.

Der Waldmops is said to wear a coat woven of willow leaves, spleenwort, and moss. He wears a magical hat fashioned from ivy, wintergreen, and yew twigs or mistletoe. He is said to be the father of Ringelros (Calendulis officinalis), which is the official flower of the Deitsch people. The spirit of calendula can be invited into the kitchen to protect the storage of processing and food storage (See Dutch Treats by William Woys Weaver, page xix).

One feature of the observance is the baking of a flatbread called a "Datsch." There is a specific type used in the Frouwasege and for St. Gertrude's Day. The first year that I made one, I eyeballed everything, and the Datsch came out pretty good. Last year I measured everything, and it came out too wet.

Pieces of Datsch are also to be scattered about for die gleene Leit (the wee folk). Please see Dutch Treats by William Woys Weaver, pp. 103-105.

My guess is that tubers were replaced by potatoes after settlement in Pennsylvania, but that is just a hypothesis.

Also, please be sure to have something white to present to Her cats. Many of us use white albacore tuna. Oh, and while this is shared UPG and there is no long history behind it, I have heard a few folks in interviews recently come up with similar ideas on what the cats' names might be. If the Frouwa were on Her chariot that is being pulled by two large cats, the one on the left has been given the moniker of "der Meisfeind" (mice-foe) and the one on the right has been called "die Rosefreindn" (roses-friend).

(Syllables and stress: ALL CAPS represents primary stress on the syllable. A syllable that has only the Initial Letter capitalized bears secondary stress, and a syllable with no capital letters is unstressed. For example, take the English word "secondary": SEC-un-Dair-ee)

der Meisfeind: dah MICE-find
(Pronounce those two words as you would in English except make the "c" sound in "Meis" sound like hard, sharp s and the "d" in "find" is more like a soft t.

die Rosefreindn: dee ROSE-eh-Freind'n
(This one can be a pistol. The ROSE is actually pronounced more like ROWSS, but the initial R in this particular case has two possible pronunciations. The more common by far is a couple of flaps of the tongue before heading into the vowel. The other is extremely rare in Deitsch but does show up for this word in some variants: the uvular R, which is when you are almost gargling when you say it.)
These names, both of current vintage, do reflect why many people keep cats around their gardens. They keep the mouse population in check, which leads to the destruction of fewer plants, such as roses. If you use this information anywhere, please be sure to attach to it that these names are unverifiable communal gnosis (UCG) coming from the current era.

Note the final "n" on Rosefreindn. That is an ending that changes a grammatically masculine noun into a grammatically feminine noun. In this case, I am sure that the people who related this idea to me (who are members of one of the Plain Anabaptist sects) were setting this up so that one cat would be female and the other male.

Otherwise, we'd have a near-rhyme. In Deitsch, the word for friend (der Freind - dah FRYND) and foe (der FEIND - dah FYND (I spelled it as English "find" earlier because it is easier to read) rhyme...

Freind adder Feind?
(Friend or Foe)... although I think Friend or Fiend would serve the narrative better.

Distelfink Sippschaft's Frouwasege will be at 17:00/5:00 PM EDT on Wednesday, March 17. The event is open to anyone via videoconference. Event Page: https://fb.me/e/d1bYNhvIO

Oh, we're also toying with the idea of "Frouwa's Kubb," which would feature cats being involved in the play. Stay tuned on that.

Posted by Robert L. Schreiwer at 11:40 AM No comments: