My first encounter with Der Ewich Yeeger (The Eternal Hunter) that I can remember was when I was about four or five years old. I was at some event being held by my mother's extended family. It was a pleasant afternoon. Suddenly, a brief burst of noise erupted all around us. It did not last long, but it was a surprising din of barking sounds. One of my older relatives said to me, "Don't worry. It is just Ewicher Yeeger scaring up the ghosts on the mountain." She said that Ewicher Yeeger helped to feed the early settlers and that we owe our survival to him.
Many years later, I began to seek more information on the entity who dwells on the Kitatinny Ridge (more commonly known as the Blue Mountain Ridge). I found this reference to his story in a book called American Folklore and Legend (pp. 28-29; Readers Digest Association, 1978):

One summer when some early settlers were struggling to maintain a colony, there was a terrible drought. The crops failed, streams were waterless, and all the wildlife left the vicinity. The settlers were in dire circumstances, and as venison was their only source of meat, one of the old men decided to use his dogs to hunt and chase back the deer. Before taking off for the wilderness, he promised his people that he would hunt forever, even through the sky if necessary, to save the settlement from starvation. After he had been gone for a few days, the deer began to appear in the valley, but the old man never returned. Ever since then, on certain nights during the hunting season, people still hear the barking of a pack of hounds off in the sky. "The Eternal Hunter," they mutter.

Over the years, I have asked quite a few folks from Pine Forge to Bowmanstown about their knowledge of the tale. Some knew it; others did not. Those who knew the tale seemed to believe that Ewicher Yeeger was never actually a man but was instead a spiritual entity.
A few years ago, after hearing the phenomenon again, I continued looking into other sources for the stories. I found some in ghost story books, including one tale that made Ewicher Yeeger sound like a criminal. This version was so far out of sync with the tales I had heard and the other stories I had found; thus, I do not give that version much weight.
However, I did discover through some aspects of the stories that Ewicher Yeeger moves in His own way in His own time. Although He is credited with saving the colonial settlements, He is also running His own errands, and it is possible for people to get swept up in the fray. A clear depiction of the scarier side of Der Ewich Yeeger comes from a painting done by Kutztown artist J. Allen Pawling. Alas, I am unsure as to where the original painting may be viewed. However, the black and white rendition below may be found on page V of Echoes of Scholla -- Illustrated by Arthur D. Graeff and George M. Meiser, IX (Kutztown, PA: Berksiana Foundation, 1976). 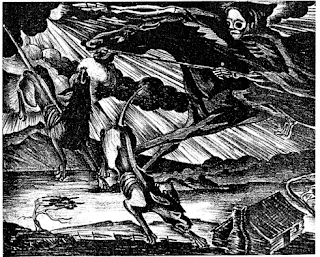 Urglaawer generally view Der Ewich Yeeger quite differently. He is usually seen as a Herne-like figure, and indeed, some Urglaawer call Him by the name of Hern (pronounced roughly like Hann). The picture even bears some resemblance to depictions of Herne the Hunter (lacking really only the horns).
The picture above brings in some features associated more with the god Holler, which is another valid possibility, particularly in relation to the presence of mountaintops sacred to Holle on adjacent ridges.
Either way, the Deitsch settlers on and north of the ridge owed their survival to Der Ewich Yeeger. Thus, it is fitting that we honor Him. Meat offerings are customary, but even flowers or other votives are acceptable. The ridge is long and wide, and the places for offerings are many.

The ridge draws closer and closer to the right of the picture above, but this particular location along the Lechau (Lehigh) served as a spiritual spot at which to share in ritual offering to Der Ewich Yeeger.
Although a typical Urglaawe times for ceremonial offering to Him would be in November, there is never an inappropriate time to honor the gods and goddesses (Ziewe) of our folk.
Hail!
Posted by Der Graabhof at 10:18 AM No comments: