"The Burning of the Butzemann," also known as "Die Butzemannverbrenning" and a few other terms.

The Butzemann is constructed at Grundsaudaag (Groundhog Day) out of selected and preserved remnants of last year's harvest and the lingering spirits of those remnants are then activated (along with the  physical material and the clothing to house them) through a ritual that Urglaawe inherited from Braucherei. He is given a name, which includes the patronymic and surname of his lineage, which is tracked from generation to generation. He then wards over the land that he is assigned. There is even one story of Butzemenner being trained by Dunner to thwart a marauding Frost Giant in mid-springtime.

Throughout the growing season, the Butzemann is nurtured and honored. Around the autumn equinox or as certain crops' harvests are completed, the Butzemann's duties are fulfilled. The activated plant spirit remnants prepare to retire. Due to the activation of the physical material and clothing (or, in our case, the shell) of the Butzemann, it now becomes imperative that the Butzemann be ceremonially burned. Braucherei tradition tells us that the burning must occur no later than Allelieweziel (Oct. 31). Tradition tells us that, if a Butzemann is not burned by the appointed time, the retired plant spirit will follow Holle as She sets out upon the Wild Hunt/Furious Host. Once the plant spirit departs, the clothes or the shell remain activated, thus becoming attractive to other spirits. The neglect of a Butzemann is considered an inhospitable act, thus adding a stain that makes the shell more attractive to baneful spirits. 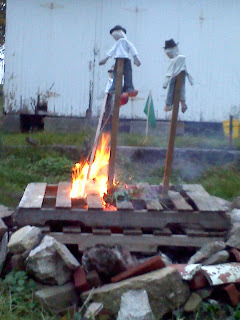 If a baneful spirit occupies the shell, it becomes what is known as a Butz, which is linguistically related to Puck and pucca. A Butz is very much a bogeyman, and there are quite a few tales of neglected scarecrows wreaking havoc across the countryside. Many Deitsch folks remember being told to get back into bed on Christmas Eve or "the Butzemann will get you!"

Now our Butzemenner have been small so far, mostly due to my lack of artistic ability. Now that more of our folks are embracing the tradition, I expect more human-sized Butzemenner to show up. I should add, too, that there is a Verbot (taboo) in Braucherei against donning any clothing that has ever been on an activated Butzemann. I have encountered several explanations for this forbiddance. The one most cited is that the activation continues to attract spirits, thus inviting madness. Other explanations include 1). viewing the wearing of the clothes as theft of the clothes; 2). the wearing constitutes an effective stealing of the plants' spirits, thus creating a hex and a major stain on the Wurt of the offending party; 3). if the offending party is the landowner, the descendants of the Butzemann (read: next years' crops) may fail as a result of the dishonor done to their father. In a similar vein, each Butzemann should have his own clothes.

Many people seem perplexed by anyone even wanting to wear an item that had been on a scarecrow outside for nine months. This requires one to look at history. In the past, whether distant or as recent as the Colonial era, there were many wanderers and vagrants going from location to location. Sometimes their clothes became more shoddy and tattered than the clothing of the Butzemann. Thus, we can see one reason for which a person might take a Butzemann's clothes.

A few years ago, a colleague in another Braucherei guild reported to me that their guild's oral lore included a story of a woman who took a section of clothing off of a Butzemann, made some patches from it, and sewed the patches inside the seams of a jacket. She then gave the quilt as a gift to another individual. This, of course, constitutes a hex or a curse.

In recent decades, references have been made to a "Butzefraa" or a scarecrow with female conventional attributes. The fact that our tradition has always had the Butzemann carry masculine attributes is no accident. Allelieweziel is also a time honoring males and masculine energies. In particular, tradition tells us that we are to recognize (and to be grateful for) the contributions and sacfices that males make for their families and communities. The timing of this honoring may have its roots in the culling of herds before winter. Similar awareness and gratitude are expressed to females and feminine energies at Grundsaudaag. Also, the earth is the physical mother of the coming year's crop, and the Butzemann represents the physical father, bringing the spirits of those plants from which the seeds come that give rise to the next crop.

We wish everyone a blessed Allelieweziel. Take some time to honor your ancestors, for they are we, and we are our descendants.

Macht's immer besser!
Posted by Der Graabhof at 5:06 AM No comments: