These pics are from the Urglaawe observance of Hoietfescht (Haymaking Festival); "die Hoiet" is a widely used Pennsylvania Dutch term for the "hay time," which generally falls between mid-July and mid-August. It is also an old/alternate name for the month of July.

Hoietfescht is a celebration of the first [grain] harvest, so bread is a common offering. While there is a debate among Urglaawer as to whether there is any separation of tribes (Wane and Ase) among the gods, this is considered by most Urglaawer to be a festival of the Wane. The Wane are generally credited with being the originators of the concept of Fruchsfriede or frith. 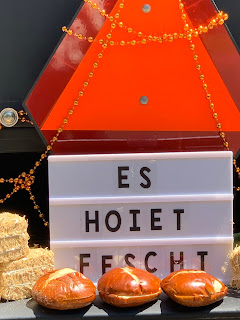 Featured this year was a representation of the goddess Erda, whom most Urglaawer believe is our "living culture" cognate of Nerthus. Despite Tacitus' description, though, we didn't bog anyone this year (there’s always next year!).

This is a celebration, hence the gold hat and gold suspenders!

The smaller wagon is full of flowers and offerings from our gardens. This was the cart before we acquired the buggy, and it still carried the images of some of the other Wane. The cart had been damaged over the years and was, as a result, rebuilt by Beck Spille in 2020 for presentation at Hoietfescht this year. Fun Fact: Beck used coffee to stain the cart!

Hoietfescht is the first of Urglaawe's two major harvest observances. The second is Erntfescht, which falls around the Fall Equinox in September. There are smaller crop observances throughout the growing season.

Posted by Robert L. Schreiwer at 6:53 AM No comments: