Coins on the Windowsill

A common Deitsch tradition tonight is to put a coin (or coins) outside on your windowsill overnight tonight.

Some variations specify that the coin/s should be silver. Others specify three denominations (nickel, dime, quarter, etc.) of coin. Some Christian interpretations are that these are for the Magi on their way to Bethlehem (PA? lol), while other interpretations definitely have this related to magic that easily fits in with Berchta making the rounds as a beggar.

If the coin/s are still there in the morning, bring them back in and "Was hawwich yetz wa ich ganzes Yaahr haawe." ("What I have now I will have all year.")

If the coins are gone, then the need was greater elsewhere, and you will receive good luck for aiding another. 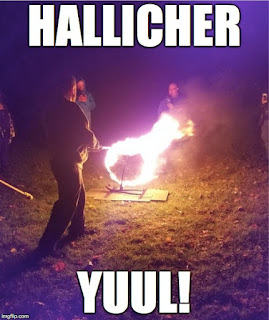 Posted by Robert L. Schreiwer at 7:27 AM No comments:

Hail Zisa! Lady of Augsburg! Undoer of Knots! On this feast day, may we all seek right action and just causes.

Posted by Robert L. Schreiwer at 7:29 AM No comments:

Observance of the Desecrated Shrines

Folks on Facebook may have seen a posted event for the Observance of the Desecrated Shrines. This observance focuses on the lost connection to many deities due to their shrines being destroyed in acts of zealotry.  The observance begins tonight at sundown (which begins June 5 on the Urglaawe calendar) and is set to coincide with the feast day of St. Boniface, who destroyed many shrines, temples, and images. Let us honor the lesser-known deities and speak their names again.

Below is a link to a program that participants can use if so inclined:

Not much is known about Reto, and some believe that he was invented to make Boniface look good. That is by no means certain, however. More research will take place on that topic.

"Viel" is also listed as "Biel" and is likely connected with forests.
Posted by Robert L. Schreiwer at 6:46 PM No comments:

The Sacred Space Conference this year was absolutely amazing. In addition to the many fine speakers (including Byron Ballard, which allowed for more connection among Hoodoo and Braucherei practitioners), there was an Urglaawe track that featured three presentations and one ritual.

The ritual was an Oschdresege, which celebrates the arrival of Spring. The ritual included the elevation of Victoria Young to Ziewern (Godswoman) and a reading of the Myth of the Oschdre.

Victoria and Rebecca Meager made some beautiful eggs for the observance. Rebecca fashioned an Irminsul for the altar (our usual Irminsul was in my truck in a repair shop in Delaware, but that's another story). Athena Dugan created stunning statuary by hand for each of the three Oschdre goddesses.

The first presentation was a new on on the Deitsches Muunraad, or Moonwheel. The Muunraad functions as a lunar calendar and "zodiac" of thirteen signs. It governs personality traits, planting patterns, and quite a few healing rites.

The second presentation was Braucherei in the Urglaawe Context 201, which is a continuation from a prior conference. This presentation featured our Cosmology and Worldview, the types of medicine utilized in Braucherei, diseases and their origins, the Zusaagpflicht, and "first-aid" Braucherei.

The third presentation was the most well attended. The topic was The Nine Sacred Herbs of Braucherei, which featured our nine and described some of their uses medicinally, spiritually, and culturally.

Distelfink Sippschaft is honored to have been able to share our lore, our insight, and our cultural experiences with the attendees of Sacred Space. We look forward to many more years of this cultural exchange.


Posted by Robert L. Schreiwer at 9:38 AM No comments: 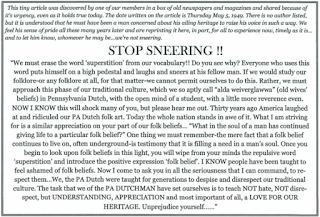 Posted by Robert L. Schreiwer at 10:55 PM No comments:

Sacred Space will be held in Hunt Valley, Maryland, from Thursday, March 15 through Sunday, March 18, 2018.

This year, there are four Urglaawe-related items on the schedule:

It's not too late to register!

http://www.sacredspacefoundation.com
Posted by Robert L. Schreiwer at 6:43 AM No comments:

Gedreier Eckhart is one of the more interesting characters in our folklore. For me personally, this is partially because Eckhart is a family surname and also because, somehow, much of my family was aware of the connection between Eckhart and Holle while I somehow did not make the connection until I fully identified as Urglaawer. Weird. 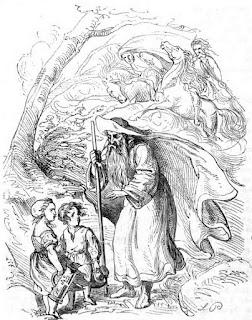 There is not a huge volume of oral lore on him from Deitsch lore, but what we do have makes him an important player in the Urglaawe view of the Wild Hunt. Our lore is consistent with much of the lore of other German lands as well.

Eckhart’s roots run deep in Germanic lore. He is of the war band of Dietrich of Bern. He appears as Eckewart the Margrave in the Nibelungenlied, and in a Heldenbuch appendix, he is said to stand before the entrance to Holle’s realm to warn or to frighten away anyone who wished to enter. He also appears in the Middle Ages tale of the Tannhãuser, and Grimm (936) postulates that he was perhaps functioning as a Heathen priest. In our lore, he may have been an incarnation of die Weisskeppich Fraa  (but that sense appears to be an outlier).

Eckhart is a loyal character throughout the heroic legends, but, in Deitsch lore anyway, his title of Gedreier (“Loyal”) comes from his dedication and service to Holle. He appears with a white beard and a white staff. He is deceased, yet he continues to serve the goddess in death just as he did in life. Our lore places him as sleeping in a linden tree or in a rock until Holle has need of him. In Germanic lore, including that of the Deitsch, he precedes the Geischderschtrutz, or the Parade of Spirits (read: the Wild Hunt), warning the living to get out of the way of the impending fury and also advising the living to be prepared for Holle’s inspection.

As the Parade continues and, as Deitsch lore says, meets up with Berchta and the souls of those who have passed since the Hunt began, Eckhart guides the souls of the Parade to Holle’s Mill, where they are crushed into separate parts and reconstituted into new soul constructs.

In this sense, it appears that Eckhart is very much functioning as a psychopomp, guiding the souls of the deceased to the end of their journey.

I have been playing the role of Eckhart in Philadelphia’s Parade of Spirits for several years, and I have been reflecting that psychopomp role without giving it due consideration. This year, I intend to make that role more pronounced.
Posted by Robert L. Schreiwer at 7:58 PM No comments: