This myth is a product of the Folklore Research Project and represents tales and fragments of tales related principally by folks who identified themselves as practitioners of Hexerei and Braucherei. Some segments of the story were also known to individuals outside of the practices. The term Wonnenacht ("Night of Joy") has been seldom used historically, but it has become the principal term for Walpurgisnacht in Urglaawe. The term Wonnedanz ("Dance of Joy") was related by a Hex from Montour County, PA, and is a replacement for Hexedanz (Witches' Dance), and Wonnezeit ("Time of Joy") describes the twelve-day observance.

Wonnenacht represents the transition from the Dunkelheft (Dark Half of the Year) to the Brechtheft (Bright Half), and the observance welcomes Holle upon Her return from the Wild Hunt. 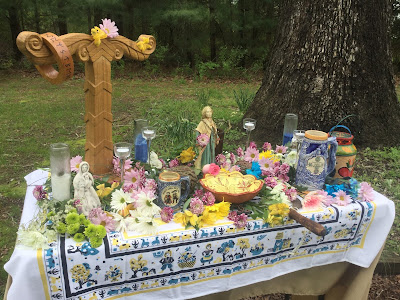 As Sunna's kiss brought increasing warmth and light to the Hatzholz (Heartwood; the physical realm), Holle sent for her ever-loyal servant, Gedreier Eckhart, whose job it was to walk ahead of the Parade of Spirits to warn the living of the fury behind him. Eckhart's love for Holle is as great in death as it was in life, so he flew into the midst of the Host, finding the goddess dressed in white and seated in a wagon being pulled by the souls of nine bulls. The wagon rolled on three great spinning wheels. From each wheel spun a multicolored thread that wove with the the thread from the others, forming a sack of infinite size named Immerraum ("always-room"). The thunderous voices of many found spirits within the sack resounded across the realms.

"I have filled the sack that cannot be filled, and it is time to bring them home," Holle said. "Go forth to Mannheem (the home of humanity within the Hatzholz) and tell the living that they may welcome the Host and that they should be prepared for the visit. Those who remembered and honored my word will be rewarded. After the visit, they are to light two fires and to pass between them. Through that action, they will be renewed. Then you are to go to the Mannheem field, where you will find a lone linden tree under which you may rest until I arrive.”

As Eckhart began his journey into the Hatzholz, announcing the return of the Great Lady, Holle took her mighty Sichel (Sickle) and cut the three threads each, using the end of the strands to tie the sack shut.

The Host crossed from the Oschtbledder (Eastern Leaves) into the Hatzholz. Throngs of people, though scared at first, came out to welcome the parade, honoring the arrival of the wondrous Lady. The clamor of spirits filled the high skies as Holle entered Mannheem. The bulls pulled Her wagon through open windows and doors, seeking those who welcomed Her. The orderly homes served as a sign that Her command was obeyed. She filled the homes with bright light that brought such joy to the residents that they broke out in song and dance.

Presently the wagon approached the Mannheem field called Hexefeld, where Holle found Eckhart sleeping within the bark of a linden tree. She sent the southwest wind, Riffel,1 to awaken him. She instructed Eckhart to lead the Host to Hexefeld and, upon arrival, to cut loose the spirits in the sack. "It is time to meet my sister," she stated.

Eckhart did as he was told. As the Host of the cosmic spirits approached the field, Eckhart saw another parade descending from the clouds, emerging from the forests, and coming from the soil. Ahead of this parade was a brilliant gray light radiating from a beautiful elderly woman who was also dressed in white. Eckhart approached the woman, recognizing Her as Berchta, and he bowed before Her. He then took the lead through the countryside as the two parades merged together and drew closer to the linden tree where Holle awaited them.

A hush fell upon the Host as the two sisters greeted one another. They embraced, and they began to spin in a dance. The dance spun gentle whirlwinds that touched the Host, bringing warmth and joy to the spirits of the Host, and they, too, began to dance. Some gathered strands and dust from the sack, streaming the strands around trees and scattering the dust on the ground.

On the twelfth day, Holle instructed Eckhart to sleep in a rock at the base of a mountain pillar while the dance continued up a ridge called Hexenkopf. The entourage eventually stopped by a marshy wellspring near the top. The two sisters took rest by the wellspring, and the spirits began to feel drawn to its depths.2

Holle and Berchta commanded the Host to continue their journey to its end by Holle's home.

Holle led one half of the parade to an elder bush, the roots of which reached beyond the Hatzholz and into the dark realms, taking nourishment from three creeks named Schprudlendi, Gwellendi, and Fliessendi.3 Berchta led the other half to the depths of the wellspring, which emptied into the same creeks.

Holle unhitched the bulls from Her wagon and yoked them to a giant millstone named Seelbrecher ("Soul Crusher"). Behind Berchta, the spirits lined up and entered the Mill, where they would be split apart, never to return in their present form. Holle returned to the joyous Mannheem, taking Her seat upon the Hexenkopf pillar while Eckhart sleeps in a rock.5

On the other end of the mill, the kernel of the selves of each soul emerged behind Berchta, who then led them up the world tree to the Unnergegend. There they take full form and await their return to the living realms.6

Thus, the Bright Half of the Year began and order was restored to Mannheem. King Frost, fearful of losing his grip on the valuable realm, sent his armies to attack.7

2 Magnetite was/is common at Hexenkopf and was eventually mined. The most familiar ponds at Hexenkopf currently are ore holes resulting from the mines, but there are also marshy water holes naturally on the mountain that may serve as the reference to the wellspring.

3 The names of the wells translate to Brimming, Bubbling, and Flowing.

5 There are reports of a White Lady approaching walkers, carriages, and cars along the top of the pillar, particularly around Walpurgisnacht.

6 There is more to this segment to appear in the next version.

7 This is a connection to the Butzemann traditions and the myth of Dunner and the three Frost Giants, Dreizehdax, Vatzehvedder, and Fuffzehfux. At least two versions story have been described frequently under separate cover but will be harmonized either in the next version of this myth or in a separate myth.

Posted by Robert L. Schreiwer at 3:06 AM