If you live in the Deitscherei or in any Deitsch colony, there's a very good chance that you have come across the Fastnachtskuche (usually called just Fastnacht) on Shrove (Fat) Tuesday. This is a widespread tradition that continues vibrantly into the current era. 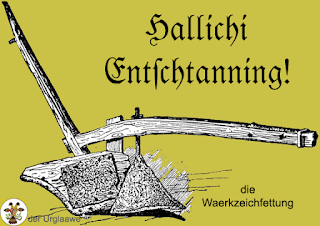 If you ask the average consumers what the purpose of these deep-fried, lard and potato doughnuts is, they will likely tell you that they are made to consume the fat in the house before Lent begins. However, there are elements of the Fastnachtskuche story that reveal connections to older practices.

In Beliefs and Superstitions of the Pennsylvania Germans, Deitsch historian Edwin Miller Fogel, Ph.D., cites quite a few living Deitsch traditions and links them to pre-Christian practices or to the old German deities. Many of these include traditional cattle-driving and wedding days (Tuesday (Ziu) and Thursday (Dunner) still observed among many Plain sectarians, ironically, although the sectarians almost certainly are unaware of the origin of the custom (11)), and also sacrificial practices.

Fogel cites (15) the tradition of taking embers from a central fire to which everyone in a community has contributed something. This is connected to the Haerdbutzerei that we discussed on Night 3. Embers from the fire are taken out to the orchards and made to smoke in order to bless the trees. Herds were driven through the cooled embers of the main fire, and charcoal from the fire was fed to the pigs. Some of what Fogel cites are actually practiced at Wonnenacht (Walpurgisnacht), namely people walking among embers, too. However, despite some discrepancies found between Fogel's text and the reports of practitioners from our ongoing interviews, Fogel's information is valuable.

Fogel describes Shrove Tuesday as taking over some of the festivals that honor Dunner and refers specifically (12-13) to "Easter cakes" in honor of Ostara (whom we know as Oschdra). This presents a discrepancy in terms of the timing and the significance of the Fettkuche, but the premise of the cakes being of pre-Christian origin fits with the beliefs of numerous Hexerei and Braucherei practitioners. Most tied the Fettkuche more to Groundhog Day and Fasching than to the Spring Equinox or Easter. The Hearth Lady or Hearth Goddess (Freid) was the "helpful entity" with whom the Fettkuche were associated, and they were said to represent pregnancy and the emergence or manifestation of new life. This is the context in which Urglaawe utilizes these cakes. Typically, but not restrictively, we consume them on the last Friday of Entschtanning.

Fettkuche are typically dipped and eaten nowadays in molasses or Turkey Syrup, but trees that run sap in February also have traditionally provided some flavor to the doughnut.

There is one additional aspect to the Fettkuche that shows a possible link to Charming of the Plow traditions elsewhere in Europe. Even today in the Deitscherei, the grease from the preparation of Fettkuche is collected and used on tools in a ritual we call the Waerkzeichfettung (Greasing of the Tools). Any tools may be ritually greased to ensure prosperity, but it is specifically gardening and plowing tools that are featured in our folklore. For Urglaawer, this once again brings Freid to mind.

There are many recipes under search terms Fettkuche and Fastnacht. Some folks within our community make the doughnuts as part of their offerings to Freid prior to our group Entschtanning ritual. Many supermarkets throughout the Deitscherei and even well into the Philadelphia suburbs have the doughnuts available beginning early in February.

Here is one recipe:  https://www.savoringthegood.com/fastnachts/

Hail to Freid!
May the coming Spring bring prosperity!