What is the Parade of Spirits?

The Parade of Spirits ("Der Geischderschtrutz" in Pennsylvania Dutch) is a grassroots, family-friendly, community-based, participatory parade that takes place in the Northern Liberties neighborhood of Philadelphia, Pennsylvania. Originally founded as Krampuslauf Philadelphia in 2011, the event has expanded its focus to include more folkloric features. 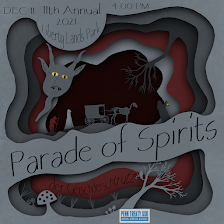 Traditionally, the time in mid-December prior to the winter solstice (Yule) was when the Pennsylvania Dutch held spooky parades and when children donned costumes and went "belsnickeling," or trick-or-treating. The Parade of Spirits is a modern expression of that old tradition.

The Parade serves as a depiction of the Wild Hunt from Germanic mythology, and features liminal and shadow-side entities, such as Belsnickel, Krampus, and the souls of the recently departed.

At the fore of the "Schtrutz" is the Germanic psychopomp, Gedreier Eckhart, who is a hero in German folklore and who serves the goddess Holle in death just as he did in life. Pennsylvania Dutch myth places him ahead of the Wild Hunt, warning the living of the impending fury as Holle travels the realms of the multiverse, seeking out the lost souls of the recently departed and capturing them to bring them back into the human evolutionary process.

Although the basic functions of the Parade are based in German and Pennsylvania Dutch myth and folklore, this is a secular event. All shadowy-side, shady-side, and dark-side traditions from all cultural backgrounds are welcomed and encouraged (please just keep in mind this is a family-friendly event, and please be careful not to engage in cultural appropriation from historically oppressed or marginalized cultures). This is an inclusive event and welcomes participants of all backgrounds; no bigotry tolerated.

While some costumes may be commercially produced (particularly Krampus, Perchten, or other traditional Alpine costumes), most are handmade, from the simple to the complex. Simply putting green or gray makeup on your face and participating as a ghoul on the Wild Hunt is fantastic!

BRING NOISEMAKERS! THIS IS A NOISY, FUN EVENT!

Just prior to sunset (16:36/4:36 PM EST), the Parade will begin with opening remarks, and then the organizers will step off from the park onto the streets. Follow Gedreier Eckhart's "Boomba" (a Pennsylvania Dutch percussion instrument that is  played primarily through bouncing) and enjoy yourself as we strut the streets of Northern Liberties.

In 2021, we will debut the Buggy in some form. We need to assess the speed at which it can be moved to see if we can have it on the street, but the Parade marchers will stay on the sidewalks.

After the Parade returns to Liberty Lands Park, please tarry around the bonfire for some fellowship (please have a face mask on hand and follow Philadelphia's covid-19 guidelines on outdoor interaction) until the performance begins.

In 2021, we are delighted to present a fire performance by bellydancer, Lorenda, and her partner, Aly Louise!

There is no cost for this event, but it is PARTICIPATORY, so... make yourself look dead and come out to the 'Schtrutz!