How can YOU observe Allelieweziel (sunset October 30 (tonight!) to sunset November 11) as a solitary practitioner of Urglaawe or as a new Urglaawer?

A video containing the pronunciation of the Deitsch words will be linked at the end of the article. 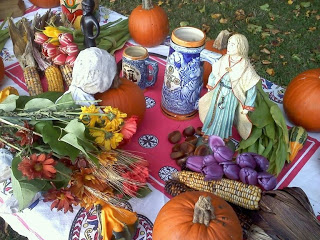 The first thing you might want to do is to understand the term. An old article from 2010 actually describes the term:

Last year or the year before, we learned that a cognate of the term does not seem to be found in German, but one can be found in Dutch in relation to All Souls Day. There likely is a connection between the word "soul" and the "Ziel" (literally, "goal") portion of Allelieweziel, which might have been an attempt at approximating the Deitsch word "Seel" (soul). At this point, though, it doesn't matter. Respondents and informants about the term and the observance were fairly consistent. This is the "goal of all love" in our modern understanding. This is Allelieweziel.

Many Urglaawer have an ancestor or forebear shrine, a generic term for which in Deitsch could be "die Vorgengersweih" or "die Vorfaahrersweih."

It is important to note that forebears covers a wide range of people who have influenced our lives. They might be unrelated to you by blood, but there is more to life and existence than blood. We do venerate our ancestors (and each other's ancestors), but we have room on our shrines for our personal heroic figures and those who aided our ancestors, etc.

Note: I tend to use the term Vorgengersweih for the shrine to those who have gone before.

The Vorgengersweih can be as simple or as complex as you want it to be. Because Urglaawe's understanding is that there is a general continuity from birth through life, through death, and through rebirth, it is not considered improper to honor the living alongside the dead, so living forebears (and even Noochkummer/Noochgenger - descendants) may be included on the shrine.

There are numerous blog posts on Urglaawe.net and articles in "Hollerbeer Hof," among other places. One place folks should always keep in mind for resources on observances is the Files section here in this main Urglaawe group. The two anchor rituals of the Allelieweziel observance are called:

-- Allelieweziel, but the main components here are the Butzemannsege, or the burning of the Butzemann, and Holle's departure. The 2019 ritual did not vary widely from the 2018 ritual, which can b found here:

The 2019 program for Ewicher Yeeger Sege may be found here:

Thus, the two main deities associated with Allelieweziel are Holle and Her consort, Holler.

Deities are not tied to calendars or calendar dates. Our observances are nailed to linear time concepts that might bear little true resemblance to the spirals or helixes of time and matter throughout the cosmos. Yet, while our calendars and our brains might not be able to wrap themselves fully around cosmic time and matter concepts, many of us see the "short cycles" of the seasons and of the life cycle. It is often said that we are "star stuff," born from the same matter that burns inside the stars themselves.

Indeed. Stars are born; stars die; from the remnants of the stars' death comes the setting for the birth of more stars.

--- What does Death mean in the great cosmic scheme?

One of the pitfalls of the meditations of Allelieweziel and of Voryuul is that we can feel very small and insignificant (which, in our world of vainglory, might actually not be a bad thing). Perhaps we can work on posting guided meditations so that folks don't get lost in the abyss of self-doubt and questioning of self-worth within the enormity of cosmic discussions that are increasingly likely to arise during Allelieweziel.

You know, after all these years of running Allelieweziel rituals, I think this is the first time I have ever fully framed it in the macro to the degree I am this year. Holle's departure signals the onset of the Wild Hunt, also known as the Furious Host and the Parade of Spirits (native Deitsch term: die Geischderschtrutzt).

All of our other observances, including Yuul, are focused on Mannheem (here, where we live) and on human activity and points of reference. Even Wonnenacht, with Holle's return, is mostly about the return of life to Mannheem, though it does hint at all of the realms joyously celebrating the passing parade).

No, there is something unique about Allelieweziel and the departure. This is about that moment when the star explodes, or when we die, or about huge transitions putting out energy. Holle's journey is cosmic, not just limited to Mannheem.

Perhaps this is about the spiral outward from Mannheem when we die? Or with each rebirth and stage in our evolution? What happens in those other realms as the Hunt approaches? Where are we as a race in our evolution? Are we any closer to being where the deities were when this cosmic day started? Is part of Allelieweziel about the point at which all of existence becomes a singularity?

Heck, as this point, I am not even sure "cosmic" is the appropriate term to use.

Besides pondering the wonders of all of creation, we should also note that, historically, Allelieweziel was the time when male ancestors and forebears were honored (much like the Idise are at Entschtanning) for their work and sacrifices that helped to build the community. This goes alongside the beginnings of die Schlachtzeit, or the culling/butchering time.

The actual culling and maturation of meat (beef takes 10-30 days) traditionally falls almost entirely in the time between Allelieweziel and Yuul. Often it is the bulls and elderly cows that were culled to serve as food for humans and domestic pets, and their culling also conserves food resources for the heifers and younger or healthier cows through the winter.

RESOLUTIONS (with a side trip into the weeds and the sandtrap)

Most Heathens know how significant oaths are. Whether they are called oaths, promises, pledges, or resolutions, they typically last for a finite period, at the end of which they should be completed. So goes it for most New Year's Resolutions.

Many Resolutions are completed earlier in the year, but for many personal changes or improvements to be successful, many individuals (and Brauchers) will lay out smaller chunks of the overarching goal. These chunks are typically timed so that the entire resolution is completed by Allelieweziel and then the old habit is symbolically killed in the fires of Allelieweziel or of Hollersege/Ewicher Yeeger.

Some of the people I interviewed felt that anytime prior to Erschdi Nacht/First Night of Yuul is acceptable because that finishes one resolution cycle right when it is time to consider any need for a resolution in the next cycle.

Now I'll stray off of the fairway and wander into the weeds, while hopefully not getting stuck in the sandtrap that Voryuul can become.

A few of the people I interviewed believed that the deadline for a year-long resolution cycle to be completed is sunset on December 8, and the next is to begin at that time. This is when the time we call Voryuul (fore-Yule) begins, and the mindset is supposed to gradually switch from the darkness and isolation of the Schlachtzeit and to become more and more enlightened as Yuul approaches.

Those of you who had front-row seats to the trainwreck that last Voryuul turned into for me (the blog posts are still up from last December) will probably agree with me that facing the shadow side during Voryuul can result in one finding many things about oneself that could use change and improvement.

I think we should always be thinking of how to improve ourselves and to take on better habits, but some efforts to change are more sacred than others, and those often end up as resolutions. I think the lessons learned during Voryuul should become part of the stage of drafting the resolution, and, when one ties the drafting to the calendar, it falls within Yuul rather than Voryuul.

Whew... That's a lot to chew on for an event that starts tonight.

Pronunciation of the Deitsch words

Hail to the Ancestors!

Hail to the Forebears!