Focusing on the process of how the Urglaawe rune system came to be only in this post.

The Deitsch runes presented us with some significant challenges for several reasons:

- While some runes have definitely been in the Deitsch culture since migration (some being at the root of some hex signs, barn stars, or other symbols), the full alphabet is certainly not of antiquity; I suspect someone within the last 100 years tried to incorporate more symbols or knowledge, but, with the suppression happening after WWI, what we had in 2008 was badly broken or incomplete. Thus, what we are presenting now is inspired by older symbols, information, and/or lore, but it, of itself, is a new product.

- Of those 31, 27 contributed a something significant. Of those, 9 were the primary contributors of the forms.

- None knew the names of all symbols.

- Of the 31, only three had a full complement of symbols, some resembling Elder Futhark symbols while others were very similar to Zodiac symbols.

- Only two had a nearly-complete alphabet devoid of Zodiac symbols, and some of their symbols conflicted with each other.

- Everyone thought there should be a symbol for "p" or "bb," but no one knew the name or the symbol.

- The runes tended to be drawn with more rounding than with sharper points, partially because they were usually written with the thumb of the person being interviewed.

- The inclusion of twelve elements, each having two runes associated with it, arose from a cluster of 11 self-identified Hexerei practitioners in Northumberland, Columbia, and Montour Counties, with five outliers in other states, plus one in Ontario. The elemental system was inconsistent; quite a few cited knowing that there were twelve, but the twelve that one listed would have differences with the twelve listed by the next.

- Of those who used any twelve elements, all but the one in Ontario ascribed a proactive (typically referred to as "positive") and a reactive (typically referred to as "negative") aspect to each, thereby (at least in theory since the whole system was kind of a mess) linking one rune as a proactive rune and another rune as a reactive rune to each of the twelve elements. In most cases, the proactive corresponded to the pushing of the dominant hand of the practitioner while the reactive corresponded to the shooing or non-dominant hand.

- I used their unique Hexerei methods of using the runes/symbols to sweep over the body from the beginning of a healing session to find imbalances of elements within the client. Concentrating on the digits, particularly those of my shooing hand, to be difficult, resulting in a depletion of energy. It was initially much easier to use broad Braucherei sweeps to seek energy blockages and then to use the individual runes to aid in the identification of elemental problems.

- As the work on the system continued, I revisited the rune/digit associations, and I am finding value in aligning the proactive rune of a particular element on one hand with the reactive rune of the same element on the opposing hand provides a bit of mnemonic aid, and I am becoming more skilled with the use of individual digits.

- The inconsistencies in the elements identified was a challenge, but coming across Ulf Asgardson's "YYggssbok" (YYggssbok, pp. 81-82. Bloomington, IN: Author House, 2007) in 2011 helped to frame the references. I know nothing about this author other than what I found in the mysticism within that book, and there was enough correspondence to the broken Hexerei lore that the author's elements were all to help to fill in the gaps. 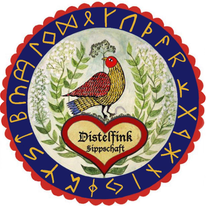 Note: All runes have a Rechtdaub, or "upright" meaning and a "Driebdaub," or merkstave meaning; these interpretations are of current-era origin.

Starting with the rune (looks like Fehu with a missing arm) at 0:00/12:00 above the Distelfink's head in the logo, I am going to identify each rune and will include important points, as warranted.

Vieh: One of the better attested too in the group. The form is also described in the work of a Heathen rune author as having turned up in Germany. Whether the form was being used for the same runic concepts is unknown. Deity association: Fro (new)

Ur: No consistent name, but primordial power is an association. The form similar to the upside down U was known by a few respondents, but it was provided in the mirror image from the Uruz rune. Deity association: Holler (new)

Dunner (also: Dorn): The lack of either "th" sound in Deitsch gives this rune the same focal sound as Daag, but this was one of the better known runes among the informants. Deity association: Dunner

Antwatt: Perhaps the rune that started this entire quest. It was the first rune that turned up in an esoteric setting that had not also turned up in a mundane or physical-world setting. It was being used by a Braucherin to awaken the dormant plant spirits within her Butzemann in what is known as a Kannsege, or the Ceremony of the Corn. Deity association: Wudan

Reit: A few names for the form were given, but Reit was the most common. Deity association: Schlumm (new)

Kerze: Another problematic rune. The earliest informants identified this with a torch, or Fackel, but the consonant sound in the middle of the name complicated matters. The form was initially given to look somewhat like a K, but later informants proposed it being set onto its back, whereupon it more resembled a candleholder, and, thus, the Deitsch term for "candle," or "Kerze," became the preferred term, while still bearing the "harnessed fire" concepts of the earlier "Fackel" name. Deity association: Zisa (new)

Winsch: The earlier form (looked like a capital W with a line over the top) of this rune was cumbersome, even if more widely used than the current form. The current form, which mirrors Wunjo, was presented by two informants. Deity associations: Wudan, Holler, Fro (new), Frouwa (new)

Haagel: This rune turns up in esoteric and mundane contexts, including a potential link to the rosette hex sign that bears many of the rune's attributes. Deity association: Holle

Not: Widely used in Hexerei sealing and healing. Many associations with deities.

Yaahr: Multiple forms were given for this rune, with the current form being in the plurality. The other prominent form was akin to a spiral.

Eiwe: Troublesome at the beginning because the earliest informant gave the same name to this rune and to what became Hengscht. The determination of the name Eiwe ("yew") came after the emergence of the rune form that looks like a bit like a yew berry.

Peil: No name, no symbol was known to the informants. However, they all believed there had been a symbol to meet the Deitsch sounds of "p" and "bb." A few even had insights how to use the energy behind it, which is how the name Peil eventually became a

Sunne:  Not uncommon even outside of esoteric practice. The possible root of several other Deitsch symbols. Deity association: Sunna

Tuisko: Originally named Ziu, Schmitz, and Tarm by informants. The Tuisko was a later emergence from a minority (three in the same community) of those interviewed, and it was ultimately the element that helped to sway our team toward choosing Tuisko as part of our practice. As the rune of proactive Earth, the earth-sprung god (believed by some Hexes to be the child of the Sky Father (Ziu) and the Earth Mother (Erda) Tuisto or Tuisco, it led, over the course of a decade, to the use of this name. The debate is not closed, however. Deity associations: Tuisto, Ziu, Zisa

Mann/Mensch: Several forms were given, including a human stick figure form, which reminded me a bit too much of the Blockheads from Gumby, and, since Blockhead is an old racist term for Germans and Pennsylvania Dutch people, well, the current form was the dominant on. Deity association: Mannaz

Loch: Rune was strongly attested to in form, but the name was hard to pin down. Loch ("hole") was provided as a name in later interviews. Deity association: Schlumm (new)

Engel: Despite the fact that English "angel" and Deitsch "Engel" look a lot alike, they are not derived from the same root. English "angel" has its roots in Greek "angelos" ("messenger"). Deitsch "Engel" is ultimately derived from the name of the Germanic god, Ing. Over the centuries, they have developed the same general meaning due to the religious hegemony of Christianity, but our use of the Engel name for the rune hearkens back to Ing. Form turned up etched into granary walls in Berks County. Deity associations: Ing, Fro

Daag: Several forms provided, but none as functional as the one we're using. Used as a concept in Hexerei (and some Braucherei) dissolution workings, this rune was actually among the most commonly known among the informants. Deity associations: Helling (new)

ELEMENTS AND THEIR RUNE PAIRS (Modern):

Element color associations are emerging mostly (but not solely) form my personal practice, so, this is new:

Following the method used by the three Northumberland Hexe mentioned in the main article, I am showing the rune-to-digit correspondence but adding the element colors in that are of my own practice. 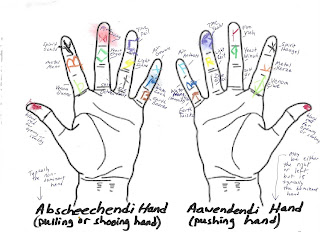